In order to buy the food, clothing, housing, etc. necessary for modern human life, a human being needs money. In capitalism, human beings usually obtain money by getting a job and working. But in terms of human well being, here are two elements of capitalism that are utterly absurd when it comes to jobs:

The example of Nike in Chapter 3 demonstrates the problem, where Nike creates hundreds of thousands of jobs paying $1 an hour. Nike is just one of the thousands of large corporations doing this.

In other words, the only way for a human being to live a decent life under capitalism is to have a good job. However, capitalism creates nowhere near enough jobs to go around, and billions of the jobs that capitalism does create are awful.

Obviously, any reasonable economic system designed for the well being of all of the humans on Earth must solve these two glaring problems with capitalism. Two things must be true in the new system:

Let’s take a moment to look at how bad the job situation is on planet Earth today under capitalism.

Here are the things that we know every human being needs in order to live their lives at a decent standard of living in the modern world:

Two billion of the world’s seven billion people live on less than $2 a day, below the poverty line, Rosling said. And only one billion live about the “Air line,” the term Rosling uses for those who spend more than $80 a day and whose lives are filled with gadgets, including airplanes. But how many live above the “Wash line?” Rosling asked. How many of the world’s seven billion have access to a washing machine? Only two billion. These people live on $40 a day or more. Everyone else — about five billion people around the world — still washes their clothes by hand. [ref]

Let’s take healthcare for just one moment, to add a bit of realism to the discussion. Think about the disease cholera. We typically do not see this disease in the United States and other developed countries, because cholera is easily prevented with good sewer systems and some basic hygiene. However, in poor countries that lack sewer systems, cholera can be a huge problem. There are millions of cases of cholera around the world every year in poor countries [ref]. Tens of thousands of these people die horrible deaths because they contract cholera and lack access to basic health care services. All of this suffering is completely preventable and unnecessary. If capitalism were working as advertised, the “invisible hand” would have completely eliminated the scourge of cholera from the face of planet Earth long ago. Slums would not exist either. Simply by looking at reality, we see that the basic premise underpinning capitalism is absurd.

How does capitalism propose that human beings acquire all of the basic human needs listed above? The answer: people use money to pay for their needs. And human beings need a lot of money if they are going to have a decent standard of living. Let’s look at the real costs of decent-quality products and services in a modern city in the United States today for a single human being [2018 dollars]:

Ignoring any costs for education (such as college education or trade education or job certification education or student loan interest), the list above totals to $2,550 per month in after-tax dollars, in a moderately priced U.S. city for a single human being. This is $30,600 after-tax dollars per year. There is no way you can rent decent housing for $700/month in a city like New York or San Francisco, so we are ignoring these cases.

These are just the basics. What does this list exclude? To be complete, we need to add things like:

This means that for a “nuclear family” with two adults and two children – historically a completely normal configuration in the U.S. – it costs $110,400 per year to operate at a decent standard of living in the United States. These costs are not in any way extravagant. No one is driving a Ferrari here, or living in Bel-Air like the Fresh Prince. This is a completely average standard of living for a family in America (minus any student loans the adults are paying off), and it really costs $110,400 per year [in 2018 after-tax dollars] for a family of four.

These are after-tax numbers. When we add in normal federal and state taxation, the numbers jump up. In the state of California (the largest state by population in the United States), a tax payer would need to earn approximately $175,000 before federal and state income taxes in order to actually take home $110,400 after taxes [ref]. To take home $39,600, a single adult would need to earn about $52,000 in pre-tax dollars per year in California [ref].

How do people pay for their needs?

Great – so where do jobs come from in capitalism?

The way that the American capitalistic economy is currently operating, we primarily have a set of companies that provide jobs to American citizens. The government provides some jobs, yes, but the majority of jobs in the economy comes from companies.

So we are led to a situation in the United States where there are not nearly enough “good jobs” to go around. Many people can get no job at all (there are many more potential workers than available jobs in the United States). And many of the jobs offered in the U.S. economy are “bad jobs” – low pay, poor benefits or no benefits, no paid vacation/sick time, etc. 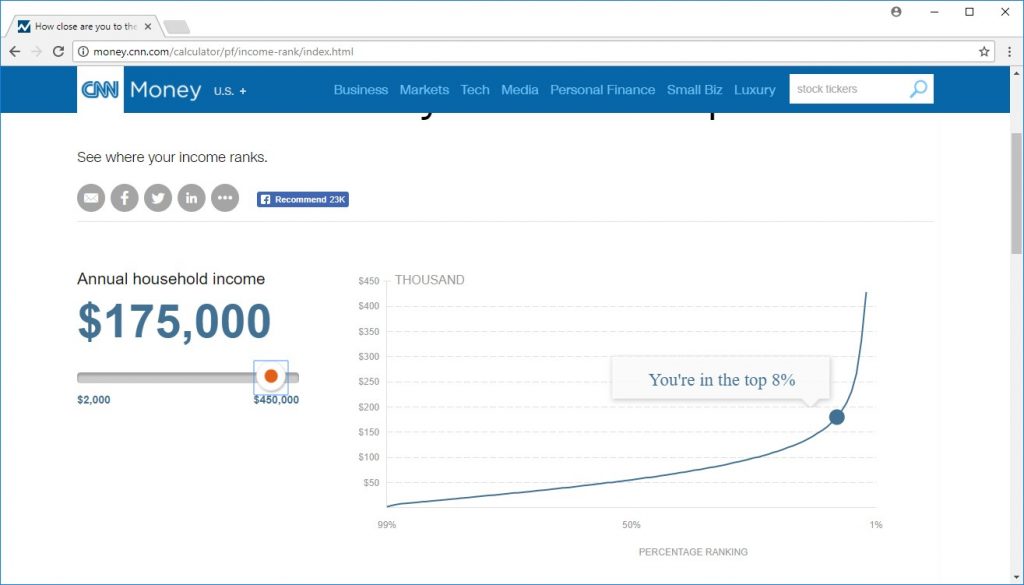 Because there are so few good jobs that can support a family in the U.S., in the vast majority of cases, both parents would have to work. With young children, this can mean the addition of $10,000 per year in childcare expenses, or more, when the children are young. Now the family of four needs to make something like $200,000 per year to have a decent, normal standard of living in the United States.

Every American who has no job (because there are not enough jobs available), or who has a “bad job” (because the majority of the jobs that do exist in the U.S. economy are “bad jobs”, not “good jobs”) are necessarily going to be poor. And this is in the richest country (by GDP) on the planet. Most places on Earth are much worse off than this. It is that simple, and that obvious. Given the way that capitalism is designed, we are destined to have a very large number of Americans living in poverty, or in-the-vicinity-of poverty. And the large majority of humans worldwide live in desperate poverty. These billions of people have no choice. The economic design of capitalism makes poverty inevitable. Capitalism simply does not produce, and has no need to produce, anywhere near enough good jobs to support the U.S. population, much less the world population, at a decent standard of living.

So let’s take Walmart in the United States as an example of how bad the job situation can get. Walmart offers over a million jobs in the U.S. economy. If robots come along that can sweep floors, stock shelves, check people out, etc., and these robots eliminate the need for Walmart to hire a million people, what will Walmart do? Walmart will eliminate a million jobs immediately. Instantly, one million people are unemployed when retail robots arrive. But it will be a lot more than one million jobs lost, because Target will follow Walmart, and so will all the grocery stores, and so on.

While Walmart waits for these robots to arrive, it employs people at the lowest pay that the market will bear. So there are a million “bad jobs” that Walmart offers. How bad are these jobs? This article points out:

Such low-wage jobs cost state and federal governments $153 billion in annual costs, largely due to government aid programs that keep them from dire poverty, the University of California Berkeley Labor Center found in a 2015 report.

“It’s not like they are suddenly hiring a lot more higher wage people,” said Olivia LaVecchia, a researcher at the Institute for Local Self-Reliance, a non-profit focused on local economies, about Amazon’s hiring binge. “It underlines just how fast they are growing, and that’s bad news for U.S. workers.” [ref]

It is the same situation at Amazon:

Amazon said its domestic workforce has grown from 30,000 in 2011 to more than 180,000 by the end of 2016, largely stemming from the company’s expansion of its warehouse fulfillment centers. Many of Amazon’s warehouse workers are temporary, which allows the company to pay lower wages and provide fewer benefits, ILSR found. [ref]

The harsh realities of life with timed toilet breaks and impossible targets inside an Amazon warehouse have been revealed in an undercover investigation. Sunday Mirror reporter Alan Selby spent five weeks working at the online giant’s newest warehouse in Essex, finishing his final shift on Black Friday.

He found workers falling asleep on their feet as they struggled to keep up with seemingly impossible targets, with a new parcel expected to be packed and ready every 30 seconds. Staff often work as many as 55 hours in a week in the £8.20 an hour jobs – although some are forced to pay £4 a day for a bus just to get to the warehouse. [ref]

The American capitalistic economy is like a big, unruly game of musical chairs:

Everyone in the crappy folding chairs, and everyone left without a chair at all, lives in or near poverty.

As we saw in Chapter 3, a company like Nike is even worse. Nike creates hundreds of thousands of jobs in foreign countries, and then pays those workers something like $1 an hour. These jobs are… pick an adjective: horrible, disgusting, appalling, monstrous… But it is legal, so Nike’s attitude is “screw ’em”. And there are thousands of large corporations on the planet doing exactly the same thing.

This is the nature of the capitalistic economies we have on planet Earth today. By design, these economies create billions of people living in poverty. And there is no incentive for things to get better. Every incentive for these capitalistic companies is to make things worse, not better. When automation allows a company to eliminate jobs, the company immediately eliminates jobs. When labor laws are relaxed or don’t exist at all, companies like Nike and Walmart will screw its employees as hard as it possibly can. This is the nature of things in most of the capitalistic economies on planet Earth today.

Given that this is how capitalism works, we get obvious results. For example, 70% of the human beings on planet Earth make less than $10 per day, or less than $3,000 per year. Seventy Percent. $3,000 per year is nowhere close to the necessary $52,000 per year to live at a decent standard of living seen above. It is 17X too little. This incredible discrepancy is the natural result of capitalism.

If we are to design a new economic system to replace capitalism, we must recognize two fundamental facts and design them into the system from the start:

Quite simply, capitalism will never do this. Capitalism will never get close, because capitalism is wired to do the opposite. Capitalism has absolutely no way, and no need, to accomplish this. If capitalism were able to accomplish this, companies like Nike and Walmart would be doing it right now. And the fact is that Nike and Walmart and thousands of capitalist companies like them are working mightily to do the exact opposite. This is why 70% of the human beings on planet Earth make less than $10 per day and why tens of millions of Americans need food stamps. The basic goal of capitalism is to impoverish most people, not to enrich them. Capitalism is about concentrating wealth. This is why capitalism must be replaced with a new system that is much, much better for humanity.