Those of us living in the United States and other developed countries are literally swimming in a sea of ads every day. Ads are everywhere. Just think about all of the ads that Americans see in a typical day:

But the place where ads are the most prevalent today is on the Internet, which has become an ocean of ads. I took this screen shot yesterday of a page I was reading on the Miami Herald Web site: 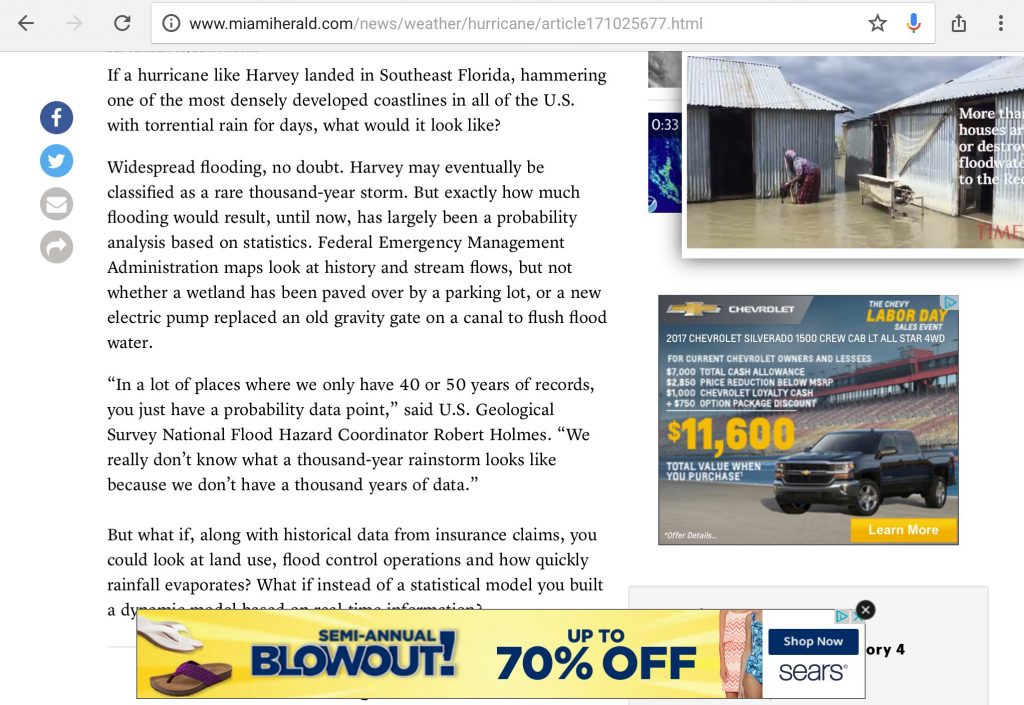 After clearing the large pop-up ad that filled the screen at first, we can see an auto-play video ad in the upper right hand corner, with a Chevy ad below it, and a Sears ad at the bottom.

The ads themselves are a major nuisance in modern life. In addition: Advertising is intrinsically anti-competitive. Large incumbents in the marketplace have far more money to use for advertising. The money to pay for this advertising is extracted from consumers in the form of higher prices. The elimination of advertising by large corporations would be incredibly helpful to the economy in a number of different ways, the two most important being:

Ads in the United States

When people think about the United States, one thing that certainly comes to mind is the advertising. Advertising is everywhere in the U.S. As one website puts it:

“Advertising can utilize almost any form of media to meet its needs, including print, television, radio, cinema, outdoor, mobile and online. If there is a space where consumers are going to look at, advertisers will buy it up. The United States, in particular, is the largest advertising market in the world. China is to be the second leading market according to the ranking, yet its ad expenditures are estimated to represent less than half of the amount calculated for the U.S. ” [ref]

What happens when we eliminate advertising? About the only major site that remains ad-free today is NetFlix:

“According to Netflix’s own data, a subscriber watches Netflix for an average of 1.5 hours a day. That may seem high or low, depending on your own usage habits, but that’s what it is, an average, which equates to about 45 hours a month.

Next, they took how many commercials are in an average hour of broadcast TV, which is about 15 minutes and thirty seconds worth of ads, meaning most hour-long programs are just about 44-45 minutes long.

A bit of simple multiplication and we get the figure that Netflix is saving us from watching 130 hours of commercials every year, on average, as opposed to live, broadcast TV.” [ref]

130 hours represents 3.25 40-hour work weeks of time saved per year. It is like receiving 3.25 weeks of vacation time per year – an amazing amount of time saved.

Imagine if we could live in a world where all of the advertising has been eliminated. We can walk around, browse the Internet, watch TV, etc. without the thousands of advertisements bombarding us, and without hundreds of hours per year of our lives being wasted on advertising, with far fewer interruptions. We might use half as much Internet bandwidth as well.

What happens when ads are unleashed?

Not so long ago, advertising of prescription pharmaceuticals was illegal in the United states. Then ads became legal, as described in this video:

The pharmaceutical industry is now spending approximately $6 billion per year on ads [ref]. Patients are the ones who pay for these ads, as the price of medicine raises to cover the ad costs.

Are these ads necessary? No. If you have a disease or condition that needs a prescription drug, your doctor is going to prescribe the best medicine automatically. The ads are a total waste of money and simply raise the cost of health care for everyone. This is why prescription drug advertising is illegal in every country on the planet except two (The United States and New Zealand) [ref].

If you think about it, this inefficiency is true of all forms of advertising – the ads increase the cost of products for no reason. Say you need a pair of athletic shoes. You go to a large athletic store, and there might be 200 different models on display. You can look at the shoes, pick the pair that is best for you and buy it. Ads are completely unnecessary.

The thing that advertising does do is give a big advantage in the marketplace to large, established companies. They can afford to spend billions of dollars on ads, making it much more difficult for new, small, innovative companies to compete. Eliminating advertising across the board would create a much fairer playing field for everyone in the marketplace.

How much does all of this advertising cost us?

Buying ad space and ad time is expensive. According to this article, “The entire ad market in the U.S. was estimated at 183 billion U.S. dollars in 2016 [ref].” There are approximately 120 million households in the U.S., so this works out to $1,525 per household. In other words, if there were no advertising, each household in America would be $1,525 richer on average because prices on all advertised products would fall substantially.

We already saw this in Chapter 3 in terms of Nike:

If Nike did not advertise, every pair of Nike shoes could be $8 cheaper.

These might seem like misprints, but as you look across the site, the cost difference between name-brand aspirin vs. generic is shocking. Primarily these cost differences are driven by advertising costs.

Cars represent another area where a huge amount of money is spent on advertising. According to this article [ref], Honda spent $1.14 billion, Toyota spent $1.73 billion, Fiat-Chrysler spent $1.77 billion, Ford spent $2.14 billion and General Motors spent $3.1 billion in 2012. This is a total of $9 billion spent on advertising by these 5 companies. But Ford, for example, sold only about 2 million cars in 2012 [ref], so the price of each new car contained an average of $1,000 in advertising costs.

If you think about it, all of this money spent on advertising is a total waste. We could radically lower to cost of goods sold in the U.S. economy by eliminating advertising.

Can we eliminate advertising?

Can we eliminate advertising? Of course. As mentioned above, it was illegal for prescription drugs to be advertised in America until recently, and it is still illegal in all other developed countries (except NZ). Television and radio ads of cigarettes were made illegal in 1971 [ref]. Simply by eliminating advertising, the prices of every advertised product would fall dramatically, and there would be a level playing field for all competitors in the marketplace.

In the new economy we are designing, there is no need whatsoever for advertising, and all of the time and money that advertising wastes. Everyone will be better off without advertising in several important ways.